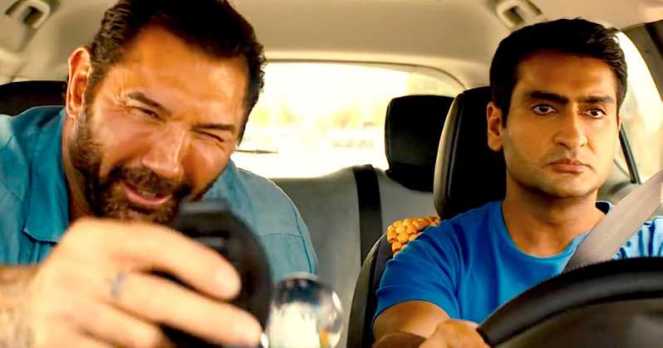 Let’s be honest with each other for a second. The 2010’s have not been the kindest to the comedy genre. While you may get your occasional Bridesmaids, 21 Jump Street, or even this years Booksmart, most comedies are usually viewed now a days as a quick cash in from studios in order to make an easy buck. Often looking like they were filmed on a sound stage and often seeming like there is no script in order for the actors to simply improv, the modern comedy as truly stagnated over the years and one could argue that we really haven’t had an all timer since 2005’s The 40 Year Old Virgin. In the weird time we currently are in, its sad that audiences usually come up short when they want a good movie to laugh at now a days. So when the trailers for Stuber were released, I became extremely excited as it truly seemed like this movie was going to be funny. And while Stuber doesn’t necessarily deliver laughs the entire run time, it still was a very fun time that served as a display case for its two main stars.

Stuber is set in Los Angeles and follows Stu, played by Kumail Nanjiani, an Uber driver who wants to open up a gym with his long time crush Becca, played by Betty Gilpin. One day while driving, Stu accepts a ride from Vic Manning, played by Dave Bautista, a cop who is trying to track down drug trafficker Oka Teijo, played by Iko Uwais, and must have someone else drive him due to his recent lasic surgery. Now Stu, realizes he has walked into something more then he can handle as he thrusted into the world of crime and murder. A comedy can get away with a lot of things as if it is funny. And as over the top as this movie can be, I can honestly say that I laughed a lot during this movie. Calling this film’s plot “over the top” would be an understatement. Not only is this a simple buddy comedy, but you have a police drug bust, Vic getting his eyes fixed, Vic also needing to make it his daughters art exhibit, Stu dealing with his douche bag sporting good boss, and many other side plots that make the film seem frantic. Stu and Vic get into many weird situations such as a shoot out in an animal hospital and a meet up at a male strip club which does take you out of the films reality in a way. However, this movie is kind of aware of how stupid it is at times and plays with it. While there were parts where the stupidity of some of the scenes got to me, I admired how well the film and its actors just rolled with it and completely sold it for laughs. The outrageous situations of this film and the tone make up half of the laughs on its own. Although the writing of this film is not what I would consider stellar, it is held up by two extremely strong performances from both of its leads. Kumail Nanjiani might just be one of the most likable actors working today, as he plays Stu in such a cowardly yet lovable way. You see at the beginning of the film that Stu is a push over and needs to stand up for himself, and Nanjiani plays this aspect of his character brilliantly. You want Stu to succeed so badly and he starts to toughen up as the film goes on, you can’t help but feel happy for the guy. Nanjiani’s comedic timing is wonderful and the way how he plays off of Bautista really helps enforce the buddy dynamic. While it’s hard to call Dave Bautista a great actor, there is a specific circle that he works very well in, and this film absolutely taps into that category. Vic is hilariously tough and is often annoyed by how wimpy Stu is, which provides a ton of funny banter between the two. Coming from a wrestling background, it should come as to no surprise that Bautista is great at playing a humorless angry and hyper masculine cop, and his reverse arc from Stu in which he begins to become less aggressive is pulled very well. Some of the best scenes in the movie involves Vic with his daughter Nicole, played by Natalie Morales, who is also great, as they add the heart of the film as you see that Vic needs to take some of his obsession with being a cop and transfer into being a good father. While some of the jokes might fall flat and the plot pints might be predictable, you still remain on board with the movie because of how much you love these two. So when a genuinely funny moment hits, it’s made all the funnier. Even though the writing of this movie isn’t always the best, you end up not really caring due how fun it is to hang out with Nanjiani and Bautista.

One of the major issues I have with modern comedy films is how they are shot. So many times you’ll see a movie that looks as if it is shot on a sound stage due to it being overly bright in order for the director to shoot in many different angles. This movie thankfully avoids this situation by shooting itself like an actual movie (I know, who would’ve guessed.) The film has actual atmosphere you speed around L.A. in an Uber and the locations you go to in the film actually seem real and not like you’re looking at a green screen. The movie uses a lot of close ups to very funny effect and the editing always has a frantic nature to it, almost as if it is trying to make you feel like a driver who is pressed for time. While director Michael Dowse’s vision is pulled off about 80%, there is one area of this film where the direction falls flat, and that is during the action scenes. Whenever the characters get into some sort of peril in this film, it seems like the people who are holding the camera just happen to break their wrists as the camera immediately starts shaking uncontrollably. While the action in this film is nothing to write home about, it still would have been nice to have been able to see it better as the shaky cam leaves many things obscured. It really is a shame when a film casts Iko Uwais as the main villain and doesn’t give any sort of hand to hand combat scenes for you to appreciate him. Although the shaky cam is bad for the majority of the action scenes, it’s never quite as bad as it is in the opening scene, which feels almost completely tonally distant from the majority of the film. The movie usually tended to have a very good tonal blend between humorous and serious scenes. While there are many funny moments in this film, it also full of genuinely heartwarming and inspiring scenes. Watching Vic trying to become closer to his daughter and watching Stu try to cope with the fact that his best friend doesn’t care about him is truly touching and adds a lot more emotion into the film. While you would primarily go to a comedy in order to laugh, often time it’s the real human struggles in these types of films that keep us coming back, which is something that Stuber will make you want to do. That being said, this film does have a ton of laughs in it and many of them hit. I’ll be honest, there are a lot of jokes in this movie fell flat for me because of how stupid they are stupid they are, such as Stu calling his car the “Silent but Deadly” because it sneaks up on you like a fart. There is one scene that involves our characters fighting in a sporting goods store that was over the top that it had me rolling my eyes thirty seconds into the five minute scene. However, most of the jokes do work such as watching Stu squeal in fear every time he has to do something violent or watching Vic struggle with the fact that he can’t see. One of the funnier smaller moments of the film involves Stu face timing with Becca, in which Stu says “you hang up first” and then Becca says “ok” and hangs up, much to Stu’s disappointment. It’s funny moments like these and the charm from the actors that keep this movie going at a very nice pace. This film comes in at a brief one hour and and thirty three minutes, which works very well as the film doesn’t over stay it’s welcome. The movie rarely beats around the bush by having its characters stagnant, which makes the movie seem faster than it is. This the type of movie in the past that I would’ve expected the studio would’ve put out with limited direction. But watching the film, I can tell Michael Dowse did a very nice job of helming the project.

Other than horror, I don’t think there is another genre that get’s more bad outings and is abused as much as the comedy genre. That’s why when a good one comes around, movie audiences as a whole tend to take notice. Considering how depressing our world can be, sometimes we all just want to laugh, and Stuber is a film that will definitely help you achieve that. In the end, Stuber is a fun crowd pleaser that despite having a nonsensical plot and writing that is more than a little dumb, provides a lot of heart and feature two great performances from Kumail Najianni and Dave Bautista, who both deliver plenty of laughs. While I don’t think you need rush out this minute as this could be a very fun mid afternoon cable watch, I would recommend you see it in the theatre. This is one movie that definitely had me wanting to give it a positive review.